Great Divide Trail hike – Where did we hike? Part 4 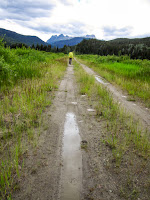 After staying the first night at Minnow Lake and then doing the compulsory kilometers along the highway, the adventure began again. You can’t describe the northern trails of the park as very well maintained routes and occasionally our feet got muddy and wet. After reaching upper areas we crossed huge muskegs that really soaked our shoes. Sometimes it was hard to keep balance while fighting your way through dense willow bushes higher than you and that meant swimming with the branches. Muskegs also made it impossible to follow the trail and it usually took us some time to find it again on the other side. 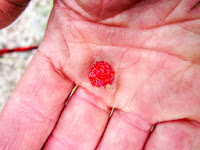 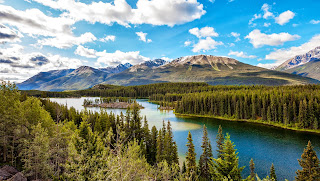 The landscape changed comparing to the southern parts of the hike, passes being lower and wetter and mountains being more eroded. Not any less beautiful though! 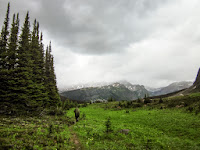 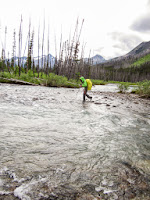 Mount Robson Provincial Park reminded us that this hike wasn't supposed to be easy. We bushwhaced in mud until we reached big Moose River and ended up crossing it three times before being convinced that there was no trail. We both slipped while we were in the water but it was Piia who finally fell and got herself soaked, not to mention our small camera. 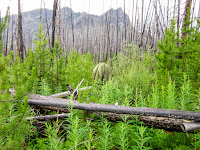 Then we faced the most complicated fire area to cross so far. It was full of small and big logs fallen to the ground and going over, under or around them in high vegetation took all our energy. We were following some kind of trail that took us over Moose River about two million times and the area changed into wet bogs that had swallowed the trail. So once more we were bushwhacking. You could say it was difficult, both physically and mentally and we had to agree to lower our daily kilometer goal.


Luckily we were gradually going up which meant the ground was getting a bit drier, though it was a very rainy day. We were happy to reach the Moose Pass, especially since we saw grizzly bear happily running on the hill. It was close enough to see clearly but far enough for none of us to be disturbed. Perfect wildlife viewing! After that the section in Jasper treated us well and we were following a nice trail. Our breath was taken away by the landscape seen from Chown Creek: a mind-blowing view to the Chown Clacier.

Leaving Jasper was definitely easy to notice. The trail conditions with overgrown willows and other branches were nothing new but the climbs were suddenly extremely steep. Then we entered Willmore Wilderness Park that offered everything you could expect from a hiking adventure. First we had even a closer look at the Chown Glacier (Julien’s favorite view) since we slept basically under it and listened its moaning during our dinner. 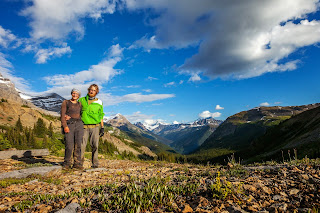 Then we went through challenging and extremely wet Jackpine River part where we couldn’t follow the trail since it went through muskegs and on the other hand got muddy and disappeared to the river from time to time.

But when we climbed higher, we had the luxury to follow a great trail and walk through amazing alpine tundra areas with 360 degree view around the Rocky Mountains, its summit, lakes and glaciers. Sometimes we crossed big alpine meadows and were surrounded by hundreds of colorful flowers. Just incredible!

Of course eventually our luxurious hiking had to end and we entered muddy forests, but still we named Willmore our favorite section of the whole hike. Especially since it was the most remote section as well, and we didn’t see people for 11 days straight. Talking about luxury! 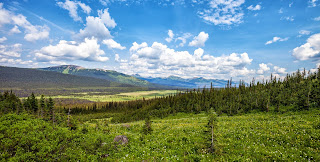 Just like that we entered Kakwa Provincial Park that generally meant walking again on huge muskeg areas where sometimes ground was covered with water and willows so high we couldn’t see in front of us. Except those shoe soaking places the park offered a wonderful surprise with nice maintained trails on wide alpine meadows. The mountains around us were still covered by lots of snow and because of meltwaters the trail was occasionally very wet, especially on low passes that was typical for this area. We established mosquito net as our basic clothing, the high buzzing noise made our ears ring.

But when we reached Kakwa Lake Campground, which meant we had finally finished the GDT, nothing else mattered. We were exhausted, amazed and proud of ourselves. And it felt unbelievable finally reach that point!

Finishing the final leg of our hike meant bushwhacking around the Cecilia Lake and climbing a pass at the other side. Finding the Côté Creek was a bit challenging without a proper map but like always, eventually we found our way. Following the creek was hard since we didn’t have a trail, except for small moose routes that kept crossing on our way. We just walked in a huge valley where the ground was wet, willows slowed us down and mosquitoes kept harassing us. But on the other hand it was surrounded by amazing mountains and we had these huge meadows just for ourselves. 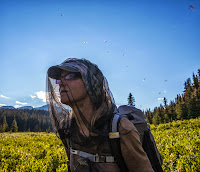 After reaching Sheep Creek we found a trail that got better and better the further we went, obviously because of many horse riders using it. Last day we were able to rush and almost run on the wide Sheep Creek and Kvass Flats trails and were eventually able to arrive in Grande Cache the same night. And suddenlythe hike was over.


Although our plan wasn’t to end the hike in Grande Cache, due to medical issues we didn’t have a choice.

The feeling about finally finishing the trip was just indescribable and it is still hard to put those emotions into words. We felt unbelievable proud of ourselves and each other and we felt we had achieved the goals we had set for the hike.


We had conquered the Canadian Rockies!


We are Piia and Julien, from Finland and France, and this is a blog about our life escape.

We share here our experiences and adventures, our hopes and fears, our crazy ideas and failed attempts. Basically what made us smile and what made us frown.

We hope the pictures we take and stories we tell inspire people to travel and explore. Join us for a beautiful ride!