I (Julien) was pretty bored in Edmonton, trying to figure out what to do after my contract at MEC ended. I was talking to Piia one night and she asked me if I had thought about the Yukon Quest at all. Well I hadn't until she brought it up. Suddenly I realized it would be crazy fun to go there and follow the race. I wasn't bored anymore! I sent a few emails asking if I could help as a photographer and then I was just waiting for my contract to be finished in order to drive as fast as possible to Dawson and hopefully be there on time for the first musher.

Monday 3rd arrived and I left Edmonton in big rush and headed to Liard Hot Springs. I was a bit scared for our old Subaru but it survived the long day. After a bath in the hot springs and a really short night I was on my way to Whitehorse. Brent Sass was supposed to arrive in Dawson on Wednesday so I thought that I had plenty of time left. Once in Whitehorse I went to the Yukon Quest headquarters and learned that Brent would actually be in Dawson in less than 7 hours. So I rushed towards Dawson and arrived there as the light was fading. The drive was so beautiful, it felt really good to be back in Yukon! 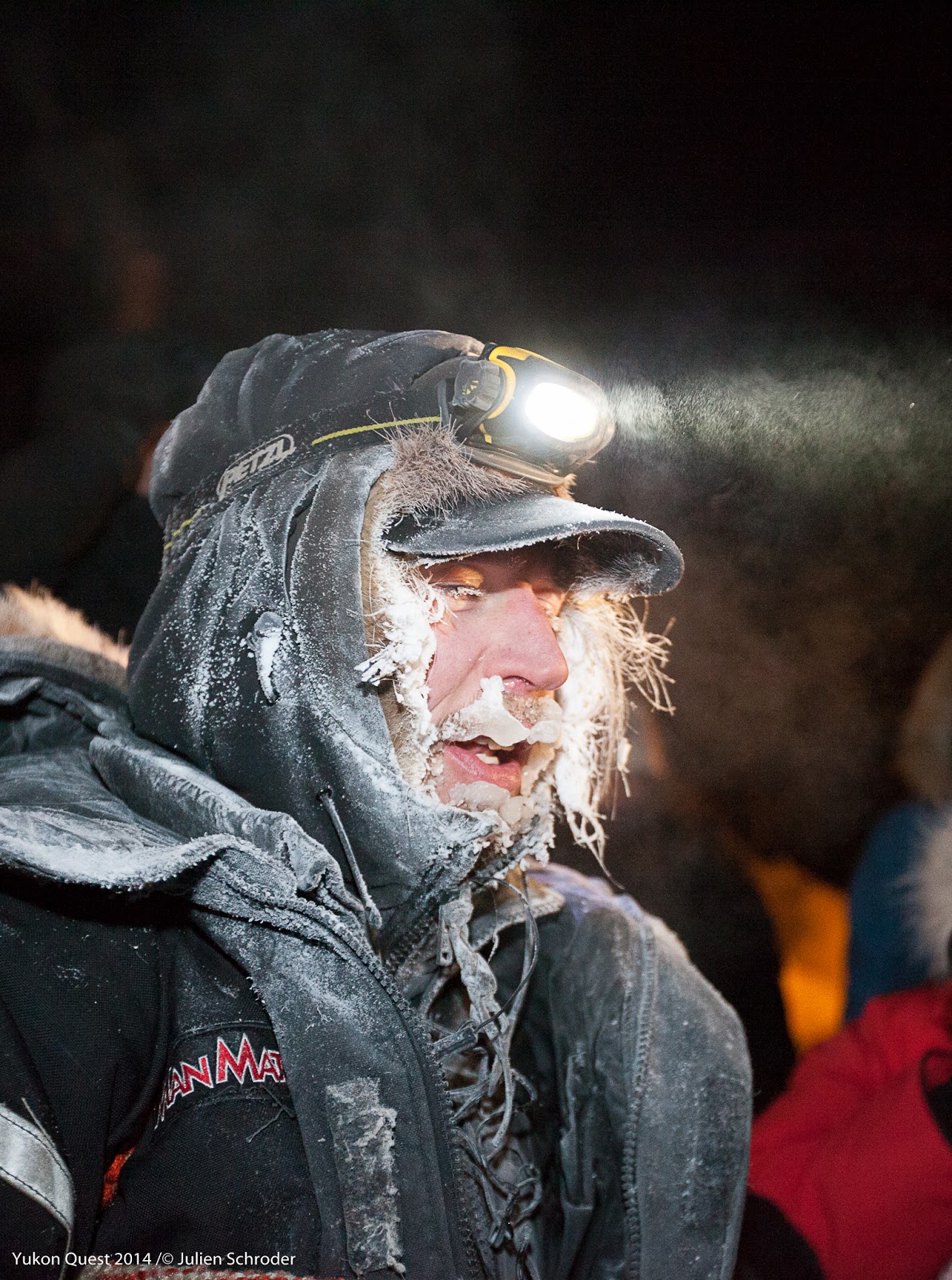 Once I had settled down in the Dawson checkpoint I met with the photography team (composed this year by Mark Gillet, Tom Barber and Heidi McGuire) and the media team from Outside the Cube (composed by Pixie, Christine, Echo and Kirsten). Soon Brent was approaching and I was in middle of action right away. In Edmonton from where I left the temperature was about 0 °C. When Brent arrived it was about -35 °C and my body and especially my hands didn't really like the fast change.

Brent's arrival was a bit stressful as lot of media and photographers were around him trying to catch some good pictures despite the night and the cold. I was a bit disapointed by the pictures but well that wasn't an easy start and many other mushers had still to come through so...

Allen Morre arrived about 2h30 after Brent so once again, cold and dark were the conditions. Even though some lights were set up around the line I still needed to push the aperture and the ISO at the maximum to get some light in the pictures. The result is not always pretty because of a lot of noise.
Hugh Neff arrived as well by night a few hours later.

My first hours in Dawson were exciting since a lot of people were around the line and many people stayed up that night to see the three first mushers and their team coming in. 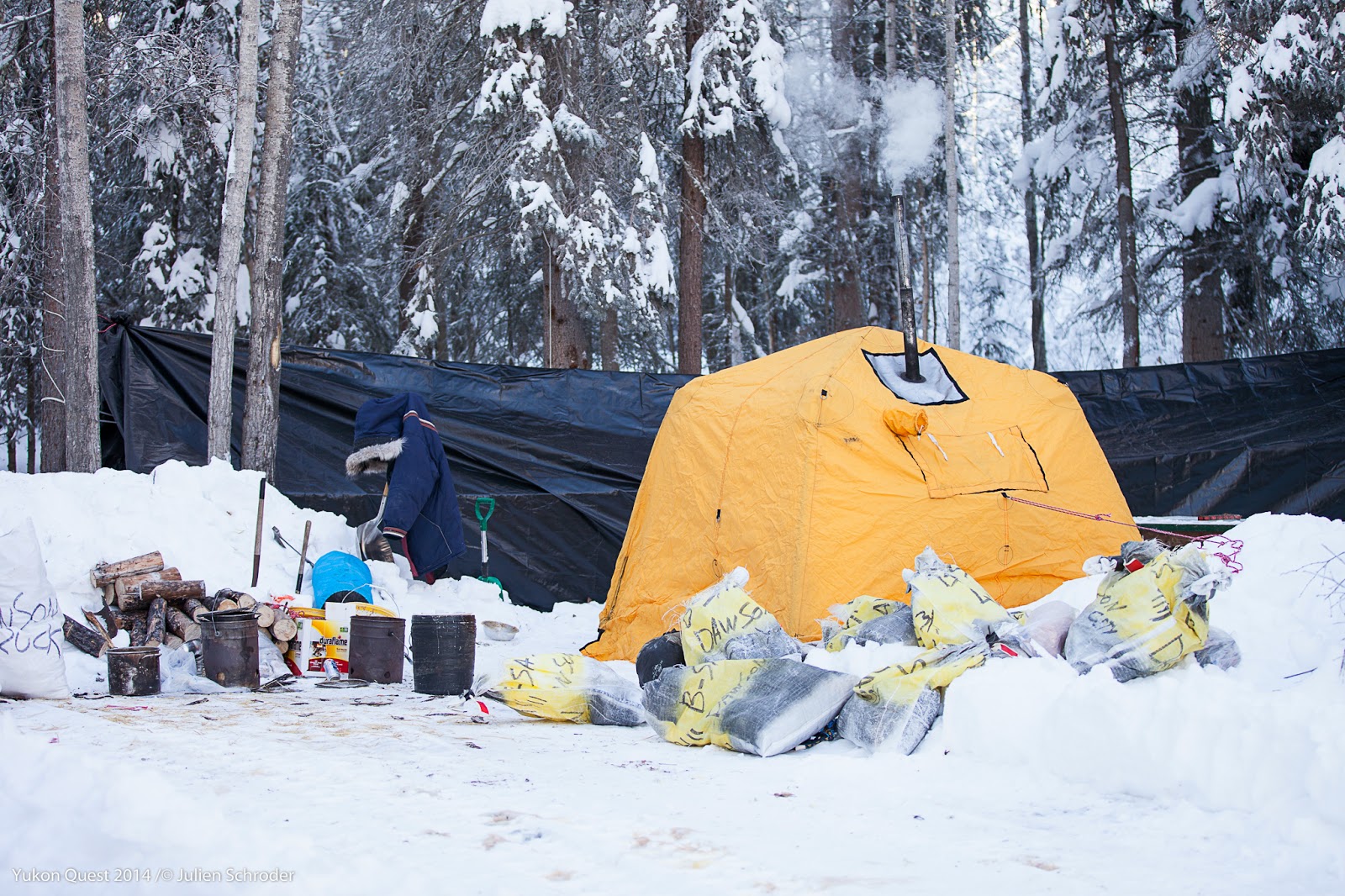 Dawson City is an important checkpoint on the Yukon Quest as the mushers have a mandatory 36 hours layover at that point. Handlers get there beforehand and set up "the camp" which consists usually of an arctic tent and a tarp with straw under on which the dogs are resting.
I had the opportunity to go to the camp areas and check the campsites. It seemed like the handlers did a really good job, most of sites looked really neat. 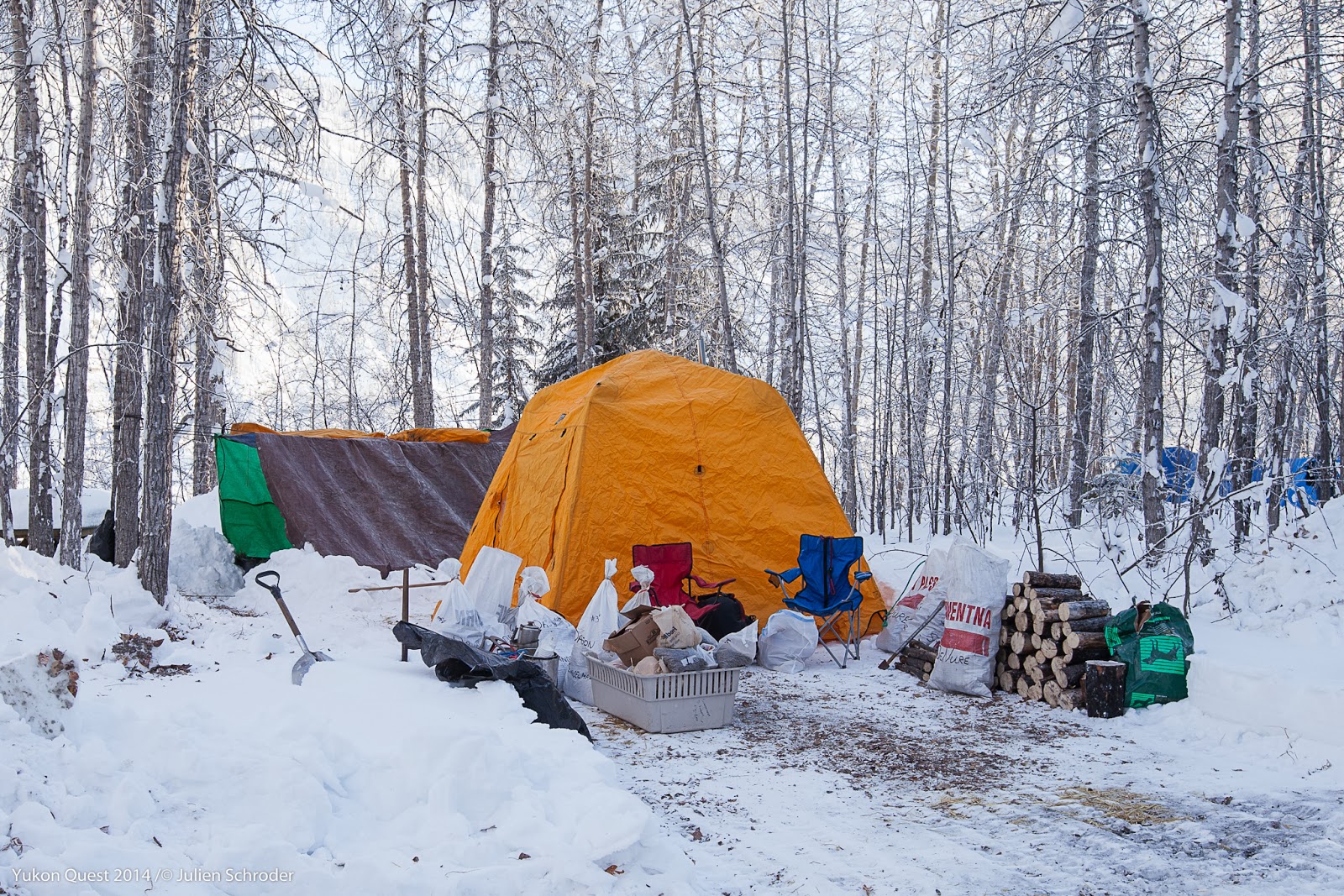 After the first mushers we had long waiting time followed by busy time. I was pretty satisfied as I got to see every musher coming in and the leaders leaving. The last four mushers came in almost at the same time which gave us a nice show: Jerry Joinson, Mandy Nauman, Brian Wilmshurst  and Hank DeBruin all arrived in the afternoon. Then I had the chance to see a few more mushers leaving before it was my turn to head to Pelly Crossing as Matt Hall and Cody Strathe were already almost there.

Time in Dawson was good. I met lot of nice people and had good opportunities to take pictures. It was at first frustrating as most of the action happened by night but then came some day action which allowed me to take better pictures. 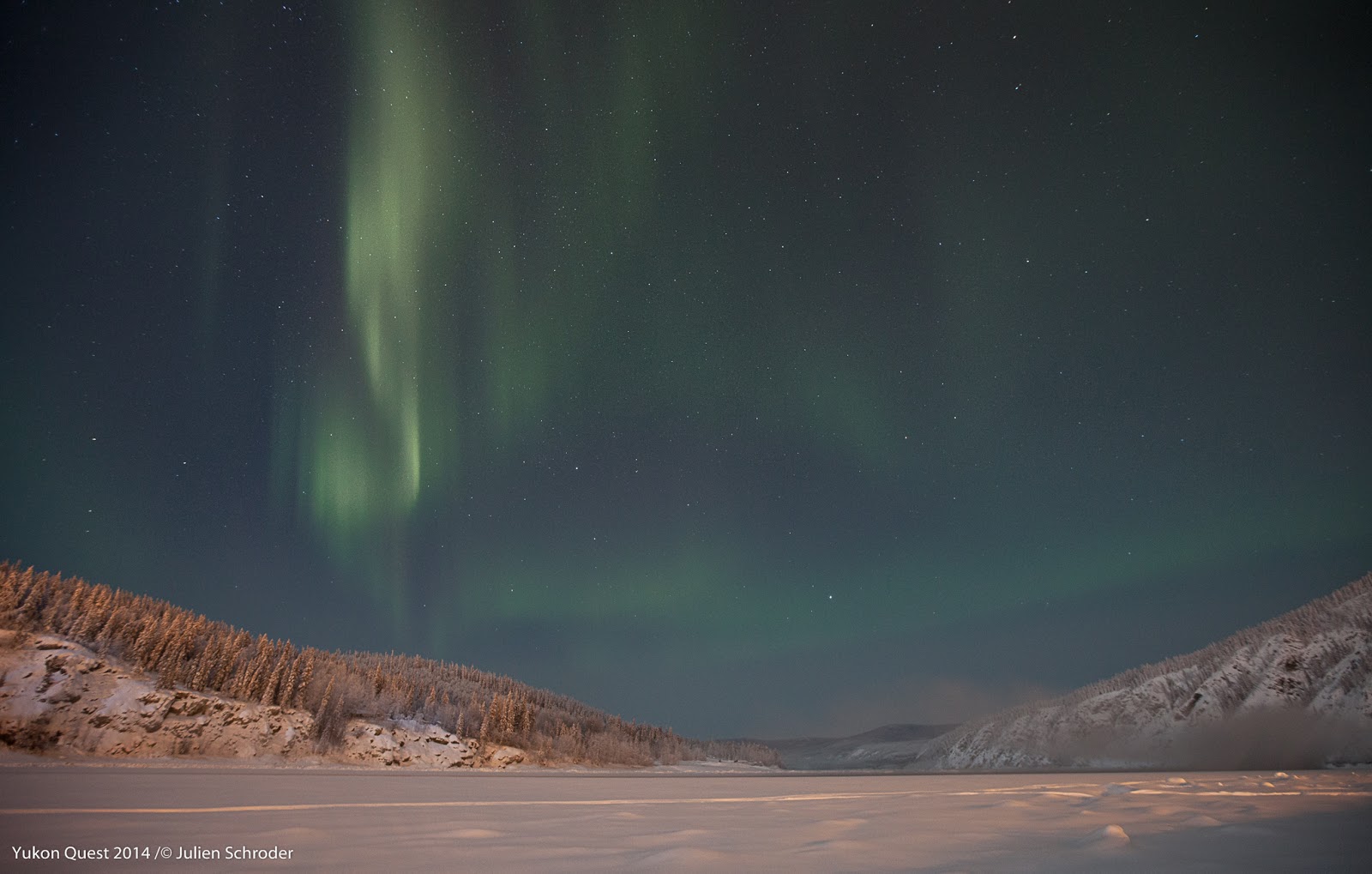 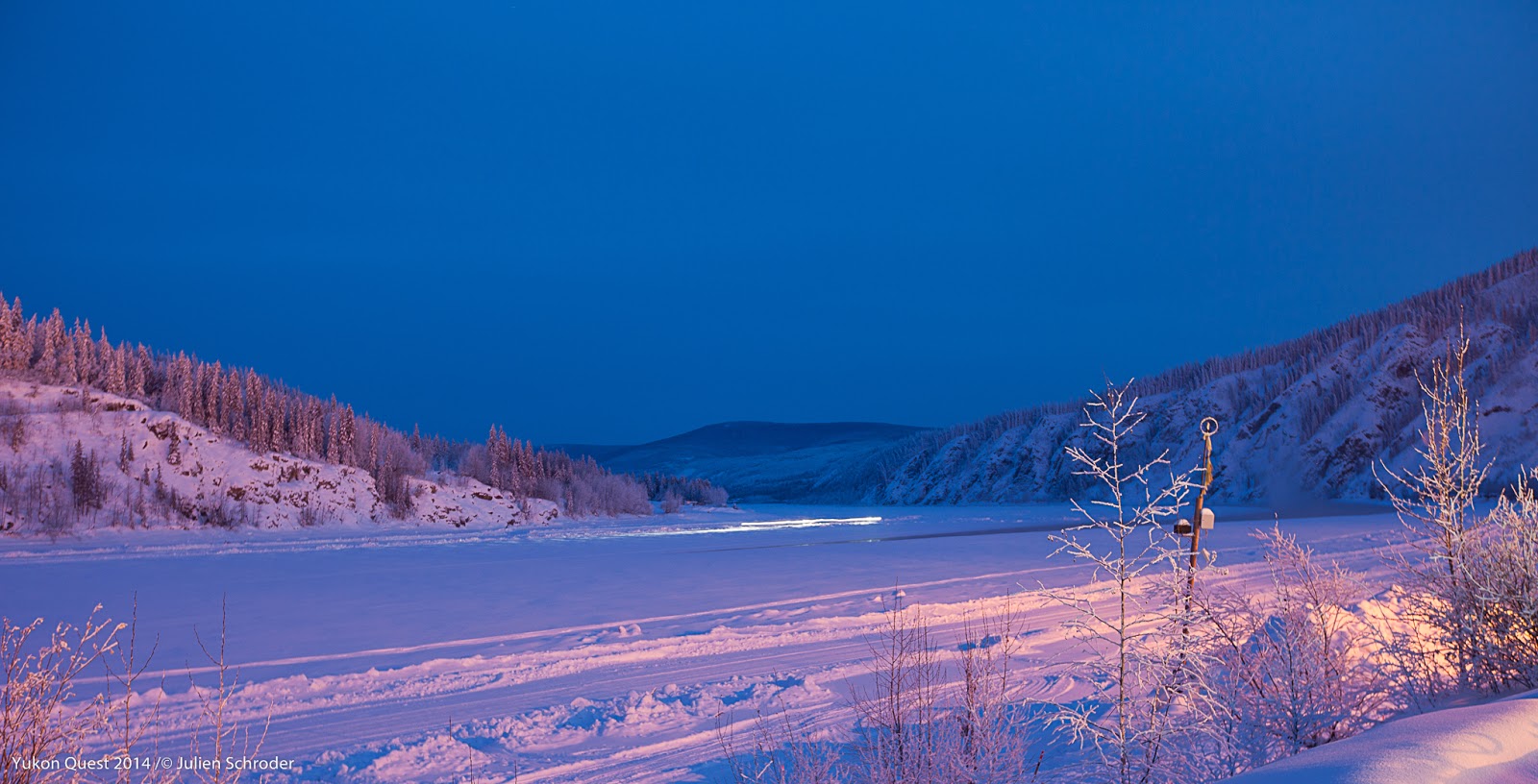 Here is the link to all the pictures I took in Dawson City :
http://www.flickr.com/search/?q=Dawson%20Julien%20Schroder


We are Piia and Julien, from Finland and France, and this is a blog about our life escape.

We share here our experiences and adventures, our hopes and fears, our crazy ideas and failed attempts. Basically what made us smile and what made us frown.

We hope the pictures we take and stories we tell inspire people to travel and explore. Join us for a beautiful ride!